From massaging it onto the scalp, to giving that ‘oil pulling’ thing a try- you may have used coconut oil a number of times, and why not? This oil is literally packed with numerous benefits, particularly when it comes to skincare and health, which probably explains why it is added to many organic beauty products today.

But what if we told you coconut oil could be the new toothpaste? Sounds crazy right? Well, its not.

Apparently, a new study conducted by a team of researchers at the Athlone Institute of Technology have found that the antibacterial properties of coconut oil could also be put to another use- possibly to combat certain strains of Streptococcus bacteria which reside in the mouth.

The researchers tested and found that digested coconut oil was capable of inhibiting the multiplication of a good number of bacteria, and was also effective in reducing the risk of oral thrush infections (sounds good!). What’s more, its natural antibiotic properties could also be credited for its efficacy in destroying bacteria that cause decay of teeth 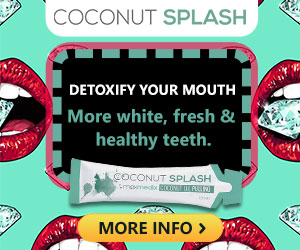 Are these Scientists Crazy and Brainwashed?

No. Absolutely not. Coconut oil has been in use since a long time to clear throat infections and urinary tract infections, tackle ulcers and other gum diseases, and its anti-carcinogenic properties have also prohibited the spread of cancer cells by boosting immunity. So its not such a surprise if it could also be used as a ‘toothpaste.’

Basically, coconut oil can work on virtually all possible infectious agents, decrease their spread and multiplication and also suppress inflammation and other signs and symptoms that come along with it. Infact, coconut oil could be the obvious better option as opposed to those toxic mouthwashes you’ve been using that could actually promote cancer (yes, cancer).

Why Try at All?

If your dental problems don’t bother you at all, its time to re-think. Dental disease is not really a disease- it is a warning sign, which points out towards other underlying problems that may be affecting you, and yes, dental problems can also themselves cause certain other health concerns, particularly heart disease.

So Should I Dump my Toothpaste?

No. It’s too early to literally replace your toothpaste with coconut oil, but yes, you could try taking a tablespoon of good quality coconut oil everyday (preferably in the morning), swirl it around in your mouth for as long as you can (it can be a bit gross), and then spit it out.

And if you’re into DIY projects, you could also try this simple coconut oil toothpaste recipe at home.

Directions: Mix all the ingredients together in a small bowl and mix it all using a hand blender until it forms a uniform mixture- you’re done!

Do let us know if you’ve tried this recipe, or if you’ve used coconut oil for any other purposes before? Just leave a comment in the comments box below- we’d love to hear from you.